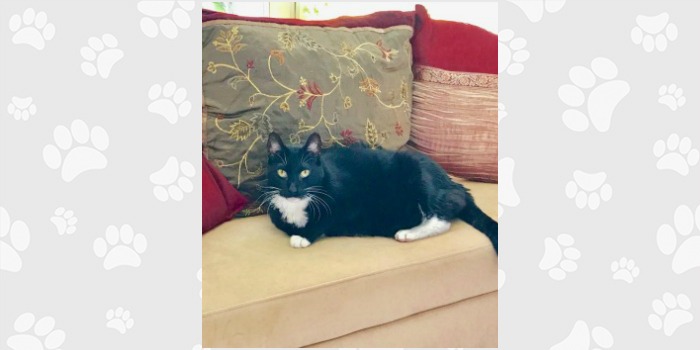 I wanted to give you an update on Francois. It’s been just over a year since he’s come to live with us and he’s doing very well. Especially at 19 years old. He had some minor health challenges mid-summer so we had to make some adjustments to his diet which he has adjusted to quite well. He had some crystals in his urine and he is allergic to some of his food. His new prescription food has his skin back to normal, nor he isn’t throwing up like he used to. He had his six-month doctor’s appointment earlier this week and the doctor is quite happy. He may have another stomach ultrasound in another month or so to see how his food allergy is affecting his system, but since his skin is so much better, we may skip it. At his age, less sometimes is better. He did have a series of test last summer too on his heart and lungs, and they are excellent, especially for being almost two decades. The only real concern is his urine crystals, which I’ll get the results back shortly to see if his new diet helped. Otherwise, he is a true snuggler. He loves to sleep right beside me or in his cat bed every night. As soon as you touch him, he begins to purr. Granite has recently taken to placing his head on Francois’ back or belly while napping. Francois doesn’t know quite how to take this new position, so he doesn’t move a muscle. My female cat and Francois do not quite get along, so they do not hang around each other. Granite makes up for it. Sometimes they are chasing each other up and down the staircase, stalking each other around the chairs and cat trees. He has no idea he is older than the rest. And his arthritis does not seem to bother him anymore. I think being active and perhaps in a different environment is helping him.

I’ve attached some pictures. Feel free to post them, letting people know that seniors have a lot of love and energy to give.