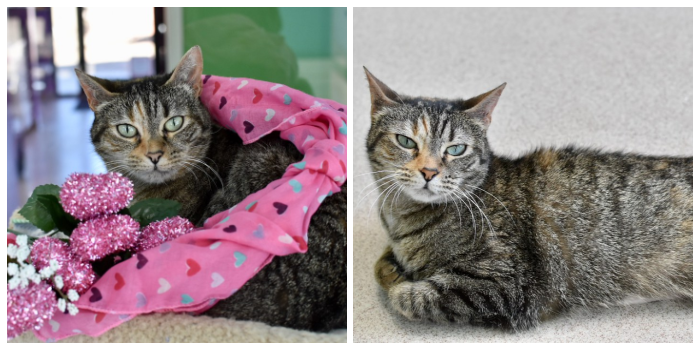 Yonah transferred from Habersham Co AC along with 16 other kitties. She was surrendered to that facility by her owner who could no longer care for her. This was sad for Yonah to lose her home after 8 years, but we've promised her that she will have a fresh start with another great family. Not only does Yonah have the most beautiful markings and adorable round face, but she is a very sweet girl. However, she can be a bit nippy at the shelter, but we feel it’s a defense mechanism of hers and she is not being malicious. She recently went to foster for a few weeks to heal from dental surgery. She was a little nippy at first, but once she learned her foster parents were not a threat to her, she stopped.

Yonah is a very independent cat so if you are looking for a lap cat or a cat that is clingy, she is not the one for you. She lives in her own universe and does what she wants, when she wants. She does not come when called, but don’t worry; she’s not hard of hearing, she’s just ignoring you.

She loves soft blankets and would sit beside her foster mom on the couch, so she could snuggle in the blanket. She liked it when she was covered up and would make biscuits because she was so comfy and happy. She is very curious and doesn’t like closed doors or cabinets. She likes them open so she can investigate what is behind them. She is also quite the counter surfer. Toys are OK, but she more or less played with her foster mom to do her a favor. She does however sometimes get the zoomies and will run around the house. Yonah is not thrilled with the other cats at the shelter so she would love to be a single kitty in her home. And it would be best if she was not with small children. So if you are looking for a cat that enjoys being with you, but not following you around all day long, then Yonah is the girl for you!