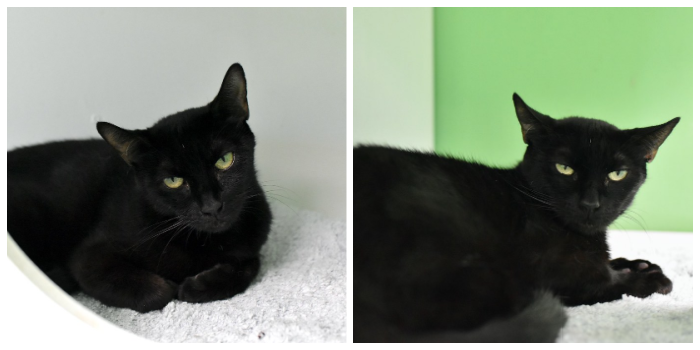 Venus came to Good Mews from Gordon Animal Control, and was relinquished with five of her infant kittens. That same week that Venus came to GM, a newborn kitten was found at a mechanic's, and thankfully Venus was such a good mother that she welcomed the new addition to her litter without any issue. Now that the kittens are old enough to be weaned, Venus has earned some well-deserved R & R, and has moved out of foster care into the main GM shelter. Venus has been a bit shy and nervous, but she still seems okay being touched and petted, although she may not give much positive body language encouraging you to do so. If you move slowly and patiently with Venus, that seems to set her more at ease, and she seems to prefer being petted around her head. Venus has also been a fan of wet food and hidey-houses or covered beds. Venus is a sweet girl and she is hoping someone will give her a chance and want to give her a forever home. Once she feels comfortable, we are optimistic that she will be a outstanding companion.