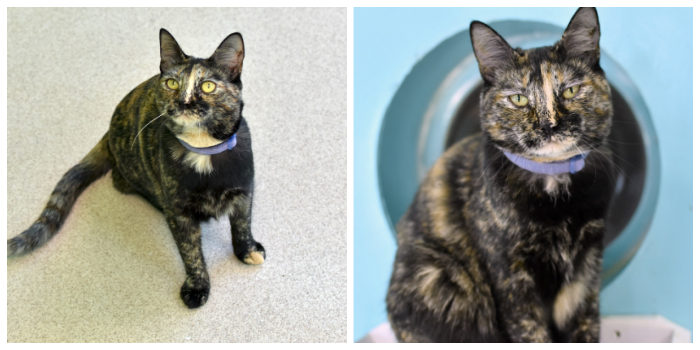 Paprika first came to Good Mews via an advocate of Cobb Co AS for a better chance at adoption. She was fostered by an advocate until we had space. Paprika and her adopted sister, Jenny were very nervous when they first came to the shelter. However, Paprika seems to be doing better in terms of socializing. She's still a bit shy, but seems to enjoy human company, as long as you take things slowly with her. Paprika had a rough start to life, having been attacked by a dog when she was a stray kitten. Cobb Co. animal control took her in and noted that in addition to the attack wounds she had a fairly severe respiratory infection, and her overall chances of surviving were rather poor. Thankfully, Paprika wouldn't give up that easily! She is now a young adult and physically very healthy. However, her foster mom expects that Paprika will always remain afraid of dogs due to her attack, so we recommend Paprika be placed into a home without dogs. Because Paprika is used to living with other kitties, she’d love a home where another friendly cat lives.