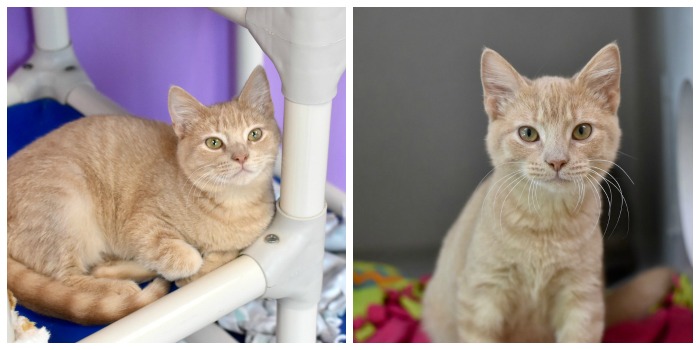 Lulu and Lena had an interesting life! They lived in Jefferson Parish in Louisiana and somehow got to the animal shelter there. Then hurricane Laura was coming in and the Good Mews Rescue Squad drove seven hours each way to save them from the storm! Lulu and Lena love and depend on each other. Lulu is the proverbial life of the party. She is fun, loving and playful and hasn’t met a stranger. She wants to know what you are doing at all times, unless she’s sleeping. Lulu likes to climb the cat tree and pounce on her sister Lena. Lulu knows her name and comes running when called. She and her sister love to wrestle. Lulu especially likes wand toys. She will also jump into any box, bag or basket. She’s very people oriented and will follow you from room to room, putting herself in peril to be stepped on. Be careful if you eat in front of the TV. She’ll steal your chicken wing in a second. Lulu is a champion purrer. Lena and Lulu are a bonded pair, so they must be adopted together!

Lulu and Lena are bonded and must be adopted together!

My Buddy’s Name is: Lena
Read about our Two-Fur-One adoption program.