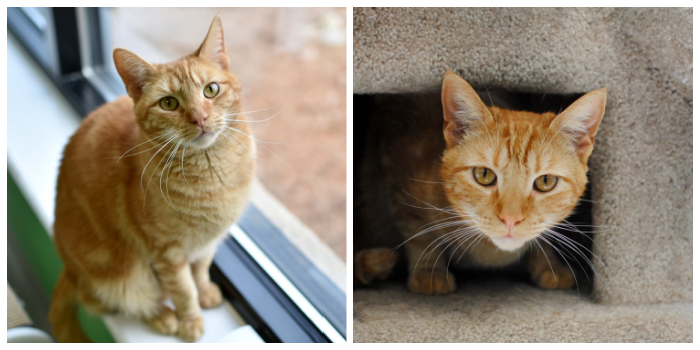 Joel was trapped by a good Samaritan that fed him and his sister, Miriam, on his porch for several months. Joel was pawing at the door begging to be let in! He didn't want this boy left out in the cold so brought them to Good Mews when we had the space. Joel is going to need a very patient adopter that is willing to meet him where he's at. Since he didn’t have much exposure to humans or the indoors, it took him awhile to learn that these are good things! Joel's demeanor has improved a lot since arriving at the shelter and now he will ask for petting from people that he knows and trusts. So once in a home, he will probably regress, but with a very patient and understanding adopter, we know in time, he will be begging for pets and rubbing all over his new family. His best friends are Patriot, Dunkin, Lucy and Linus so he'd love to be adopted with one of them if possible!