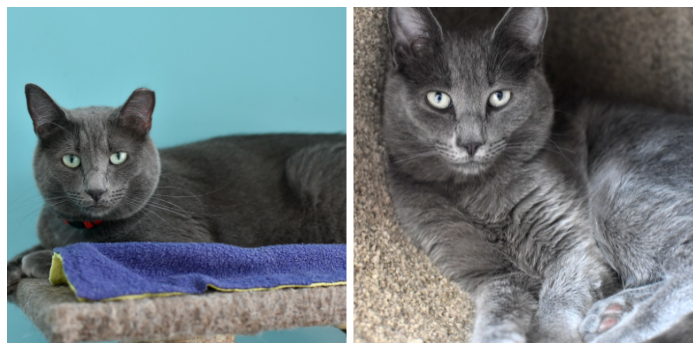 Hill was originally adopted out from Good Mews with his sister in 2020, but was recently returned due to their family being displaced by a natural disaster. Hill is a big cuddly boy who initially acts more bold and friendly than his sister, but after a few minutes with them, the dynamic seems to switch. Hill is very curious and inquisitive and likes to sniff out his environment in order to acclimate. He does seem to be either protective of his sister or just wary of other cats in general, because he's been observed emitting a low growl as he walks around sniffing out the vibes of a room. Hills also has the classic 'eyes bigger than the stomach,' problem, where he tends to overeat and regurgitate his food, so it's recommended to feed him and Ms. Potts separately. He's a bit of a food thief! Hill and Ms. Potts would flourish in a quieter household without other pets, or with older and calmer pets. Hill and Ms. Potts are a bonded pair so they must be adopted together!

Hill and Ms Potts are bonded and must be adopted together!

My Buddy’s Name is: Ms Potts
Read about our Two-Fur-One adoption program.