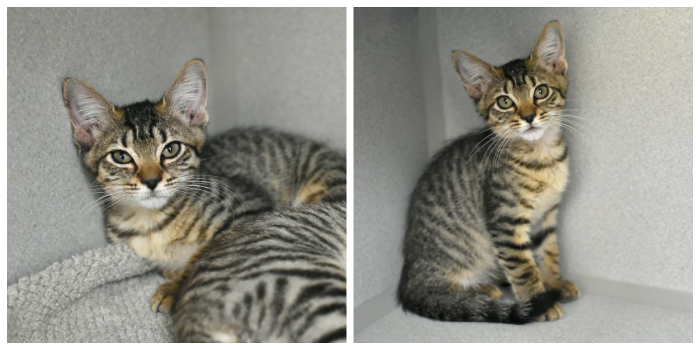 Henry and his sister, Kinsey, were rescued from Paulding County Animal Control. They spent some time in a foster home until there was room at Good Mews. We don't know what their life was like before coming to us but they were somewhat scared and uncertain around people. Kinsey came around quickly but Henry took a little longer and remains a bit reserved. He does have a fantastic purr and it is well-worth the bit of time it takes for him to feel comfortable with you in order to hear it. The fastest way to Henry's heart is to play with him. He loves toys of all kinds but using a wand toy is the best way to become his friend. But he also loves chasing balls and often carried toys around in his mouth. He would regularly start wrestling matches with his sister and while she held her own Henry took great pride in pinning her down and chewing on her ears! Henry just loves to have fun. Henry and Kinsey are bonded and must be adopted together!

Henry and Kinsey are bonded and must be adopted together!

My Buddy’s Name is: Kinsey
Read about our Two-Fur-One adoption program.