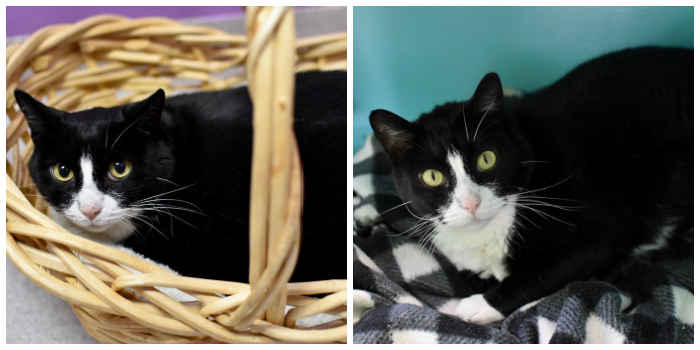 Guillermo came to Good Mews in when his dad passed away. His two brothers, Archibald and Goliath came to Good Mews a few weeks before him, because Guillermo was so upset about losing his dad, he hid from the friends that were bringing him to us. Once they were able to find him, he joined his brothers. He was placed in a Suite with Archibald because he was so scared and also because he was pretty overweight. Their brother Goliath was very social so he was adopted right away.
Because Guillermo was so upset, volunteers spent a lot of time with him, helping him adjust and letting him know he was not alone. That made him feel so much better and he started to venture out of his Suite, meeting new cats and humans. Now he is a social butterfly! He struts around the shelter, with his head held high, saying Hi to everyone he passes. One of his favorite things in the world is spa day! He loves to be brushed and pampered and his big motor will run the whole time he is being groomed. He is hoping when he finds his new family, he can schedule regular spa sessions! Guillermo is a wonderful cat and we are hoping he finds his forever home soon. He gets along great with Archibald if you are looking for two sweet boys to join your family!

Guillermo is FIV+, but don’t let that scare you! FIV+ cats can live long and healthy lives. They can also live safely with FIV negative cats. FIV is spread through severe bite wounds, so it is important that your kitties get along. To learn more about FIV, please read the articles under the Advice tab.