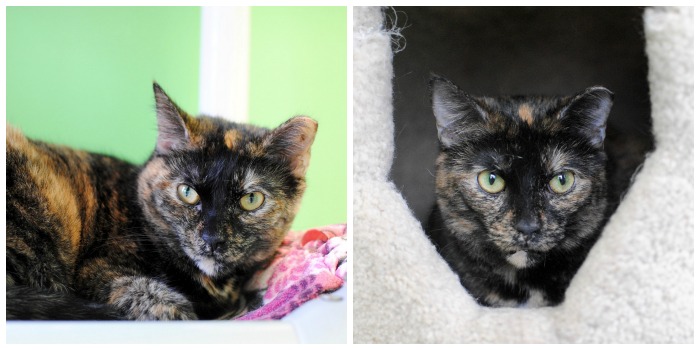 Gracie and her brother were born into a feral colony behind a restaurant. While someone was doing TNR, they didn’t want to release the kittens because they wanted to give them a chance to grow up in a loving home with a family that would care for them. They were fostered until Good Mews had space for them.

Gracie is a little shy at first but once she gets to know you, she is an affectionate little tortie-girl that will roll over for belly rubs. She enjoys the company of other kitties so she is required to have another friendly feline in her home. She loves to lounge on blankets or rugs in the middle of the room, so she can take in her surroundings. She is a great cat, but will need a little time to adjust to a new home. Once she knows she is safe and loved, she will make a great companion.

Gracie was adopted but later returned due to inappropriate urination. We believe this was behavioral and maybe out of fear from being a bit lonely without a cat friend to keep her company.