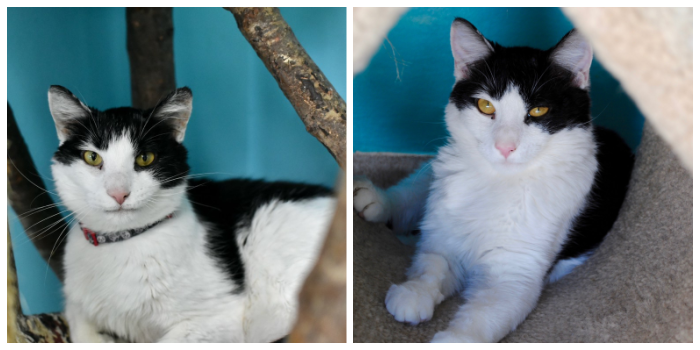 Gomez was recently returned to Good Mews when his owners could no longer care for him. Gomez is a very sweet and gentle middle-aged man, who may be a bit overlooked in the shelter due to his shyness. Gomez gets along with other cats but he previously lived with one who was more dominant, so that has contributed to his timid nature. Gomez seems to know his name, and is very motivated by wet food - as the saying goes, the fastest way to Gomez's heart is *definitely* through his stomach. If he thinks wet food may be on the menu, he's very quick to headbutt you and do face-rubs. Because he's intimidated by the other cats, we're concerned that Gomez may not venture out to walk around or explore the shelter much, so we'd really like to get him into a home where he can be more comfortable and show more of his winsome personality. Gomez has been on a prescription diet in the past for urinary stones but he was recently screened for that and received the all-clear to eat normal food. We think these issues presented in his previous home as some of the other kitties were picking on him, so he should thrive better in a calm home without that sort of stress!