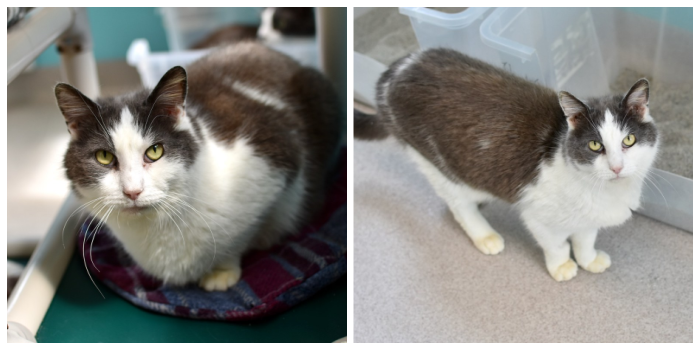 Frank transferred to us from another rescue for a better chance at adoption. Frank was initially quite withdrawn and self-isolating when he first came to our shelter. Even when given the chance to intermingle with the cats from his previous rescue group, he seemed uninterested and nervous. Possibly related to this behavior was severe dental issues that Frank had. Although dental disease was common for many cats from the C & P rescue, Frank's was amongst the worst. Frank recently had a dental cleaning and extractions. As his mouth has been healing, he has begun to act like a much different cat! Now Frank is often walking around with his tail up, (softly) meowing at you or settled atop a cat tree or vertical space to enjoy his surroundings. He is still a bit of a shy guy and generally calm, but he appears to be feeling improved and more open with his true personality! Frank is a wonderful boy that will flourish even more once in a forever home. He has a lot of love to give and once he feel safe and loved, he will make a wonderful cuddle buddy!