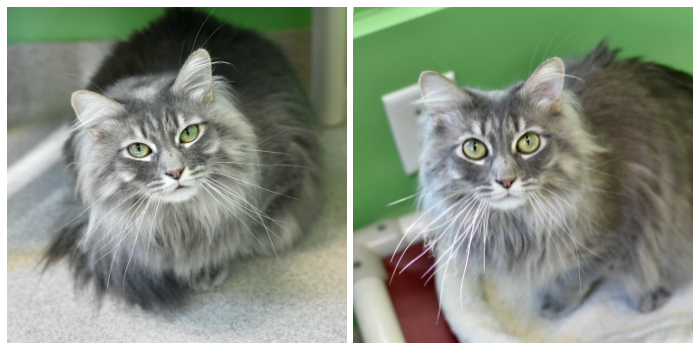 Colonel originally came to us as a kitten in 2018 when he was pulled from a bad situation along with a bunch of other kitties. This cutie was quickly adopted and had a nice family for a few years. Colonel never got along very well with the female cat in his house and would often mount and hold her down. There were also instances when he would defecate outside of the litter box. We're not sure why Colonel was showing these behaviors, but his family made the hard decision that he might do better in another home. His last family said that he is friendly, loves to be petted and held or snuggle in your lap. Colonel has been a good citizen since arriving back at the shelter. We have not seen any bullying signs so far but he's only been in a Suite with a confident male cat, but we would still like to recommend that Colonel may do best as an only cat in his next home. In November 2021, Colonel had 9 teeth extracted and has healed nicely from this procedure. We recommend annual dental exams with a veterinarian to assess the need for future dental care! He also gets easily matted so his new family will need to commit to keeping his beautiful fur brushed.