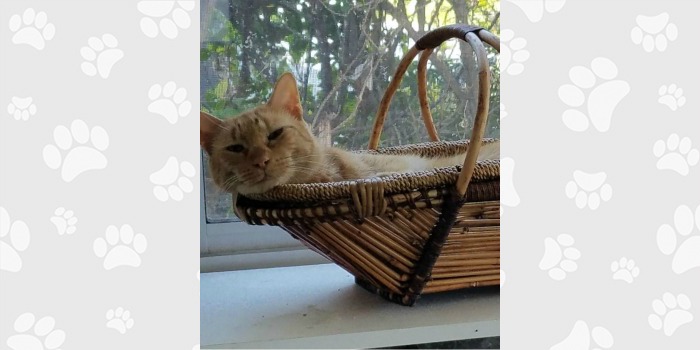 I was a volunteer at Good Mews for four years and met Butch in September of 2012 on my first day volunteering. He was so funny, outgoing, naughty and a bit weird, I fell in love with him right away. Every week I’d come into the shelter and he’d be the first cat I saw. I’d say, “you still here?” and he would confirm that indeed he was. I was amazed that no one adopted him as he had more character than any cat I’d ever met. He was legendary for being able to get into a human’s blind spot and sneak into the kitchen (this was the old shelter) without being spotted. Then he’d take the staff on a merry chase as they tried to catch him and evict him from the forbidden zone. He would ride around on the food and water cart as I was putting out the food. He constantly tested the water for the proper temperature. Everyone kept telling me that he was my cat, but I already had five at home and resisted for a few months. Finally, when he told me quite vocally and firmly that he was mine, I took him home. He settled right in with the other cats and the two dogs.
We moved to California four years ago and Butch proved himself to be a Malibu cat at heart. I’m surprised he hasn’t taken up surfing yet.
Mahalo from Butch and me.