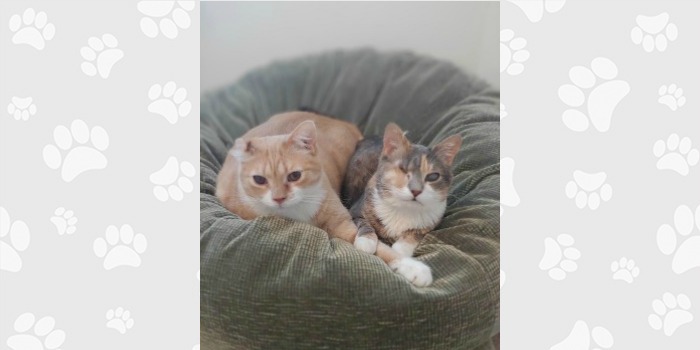 Amy Lee and Tanger have been at our house for over a month now and things are going even better than expected. I think it’s been really good for these two b uds to have each other during such a big change after being at the shelter for 2 years.

Amy Lee and Tanger have their own “safe room” with a big window to watch wildlife and they have slowly gotten to the point where they are out of it the majority of the time. Tanger is still quite the little piggie so we have to be creative with feeding the other pets as he would eat 6 dinners if given the chance! They are not yet best buds with the other 3 resident cats, but also no scuffles! Our other cats are used to me bringing in and out fosters, so I’m not sure if they realize yet that these two are permanent editions!

Thankfully, they don’t mind their dog brother, Sawyer. . That was my biggest concern with taking them home and I am pleasantly surprised. Though, Tanger has tried to steal Sawyer’s dog bones and I have to remind him of his species. Sawyer was already my shadow and followed me everywhere, but now that Amy Lee does the same, I now have 2 shadows.

When they first arrived, Amy Lee and Tanger didn’t know how to go up and down the stairs. I think it was especially tricky with their vision impairment. It took them about a week to figure it out and now they are pros. In fact, Tanger commonly gets the zoomies going up and down. He needs the exercise so I’m not complaining!

They love snuggling in our laps or on our bed to watch TV. Amy Lee’s favorite shows are Queer Eye and Game of Thrones. Tanger seems really into Fixer Upper. Amy Lee also really loves when Justin is playing video games and will curl up between him and the controller.

One final interesting tidbit is how Amy Lee responds to music. Justin and I have a record player and lots of old records passed down from each of our dads. Most evenings while cooking and eating dinner, we listed to music. Amy Lee consistently stands about a foot from the speaker and takes it all in. It’s her own version of “sound journey”.

Overall, they are fitting in great and we are so happy to have them as new family members. I promise to give another update in the coming months! I’ve attached a few pics for your enjoyment!